The Dutch are known as cheese-heads around the world

First, I will apologize for all of the ‘cheesy’ references in this article; I just could not help myself. In a country prospering from an obsession with the stuff, there are cheese references and cheesy opportunities around every corner. In 2012, Dutch cheese was voted the best cheese in the world. In fact, Netherlands is the world’s largest exporter of cheese. That says a lot for such a small country.  The Dutch dairy industry is worth about 7 billion Euros a year. It’s hard to believe that a tiny country is actually the Big Cheese.
A Cheesy History. Dutch cheese dates back to the days of Julius Caesar, who mentions it in his logs (journals, not cheese logs). In the Middle Ages, as Dutch power grew, so did cheese production and exportation. Cheese contains many of the same vitamins and minerals as milk, but is easier to transport and has a much longer shelf life (although how long a cheese will keep may depend on the type of cheese). The Dutch are known as cheese-heads around the world, and after a visit to a few of the sites below, you will see why. All the places mentioned in this article can be reached easily by train from Amsterdam. 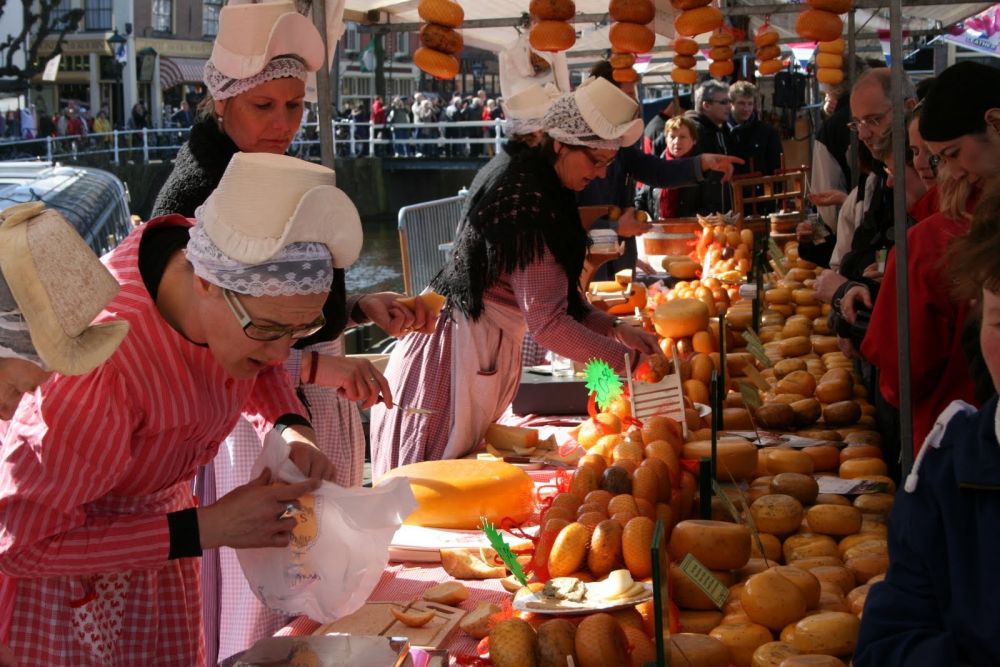 The Cheese Markets
Sailing the Seven Seas with Cheese. As the sailing industry grew in the 1600’s, also known as the “Dutch Golden Age”, cheese became an essential product for sailors who, on their long sea journeys, did not have access to fresh milk. Cheese production led to the rise of cheese markets. Towns where these markets were received recognition of a high status in the country. Five of these cheese markets still exist today, all within an hour of Amsterdam by train. Two of the five are actually functioning. The other three are tourist attractions, designed to demonstrate the more traditional cheese markets.
Modern Cheese Markets. In both Woerden and Gouda, there are cheese markets where dairy farmers come with their cheese to have it weighed, tasted, and priced to trade and sell.
• Woerden. The Woerden Cheese Market is known for its boerenkaas, or farmer’s cheese, fresh cheese made from raw milk.  If you happen to be lucky enough to be visiting on the first weekend in June, head over to Woerden for the Grass Cheese Day, where the cheese made from spring grass-fed cows is celebrated.
• Gouda. The Gouda Cheese Market has been functioning for over 300 years in the shadow of one of the most beautiful buildings in the Netherlands. De Waag, or the weigh house, is the center of the cheese market. Gouda is world-famous for the cheese that originated there. On Thursdays, there is also a traditional Cheese Market in Gouda.
Traditionally Cheesy Markets.
The traditional cheese market includes men of different guilds, distinguishable by the color of the hats, carrying large cheese wheels on a large wooden plank. Their deals are made with special handshakes. Traditional cheese markets can also be found in Edam, Hoorn, and Alkmaar, with Alkmaar being the most famous.
• Edam. The Edam Cheese Market, held on Wednesdays, is based on the famous Edam Cheese, known for its distinguishable small size, and demonstrates moving the cheese from the harbor to the weigh house, just as in the olden days.
• Hoorn. In Hoorn, the market, which takes place twice a day on Thursdays, focuses on Beemster cheese.
• Alkmaar. In Alkmaar, you will find the best known cheese market in the Netherlands. The market has been officially held there since 1593. A historical re-enactment of the cheese markets from the Middle Ages takes place on Fridays in front of the weigh house in Alkmaar. 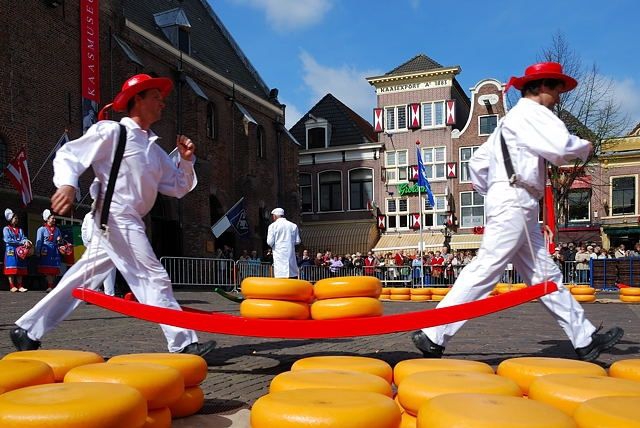 Cheese Museums
• Alkmaar. On the second and third floor of the weigh house, there is a cheese museum where you can learn more about the history and the process of making cheese and grab a small sample.
• Amsterdam. There is also a Cheese Museum in Amsterdam. Located just across the street from the Anne Frank House, the Amsterdam Cheese Museum houses the world’s most expensive cheese cutter. To add to the ambiance, the employees don old-fashioned clothes, including the famed Dutch Clogs (klompen).
Cheese specialists in Amsterdam
A cheesemonger, or cheese specialist, is a highly trained expert in this field. Much like their counterparts in the wine industry, cheese specialists have acquired both extensive formal, practical, and tasting education.
• Amsterdam. Reypenar’s Cheese Tasting Room on the Singel, is the best known cheese shop in Amsterdam. The award-winning cheeses can be sampled during a one-hour Cheese Tasting, which is guided by a cheese-tasting expert and is paired with a suggested wine (or soft drink).
• Henri Willig stores can be found throughout the city… just follow the hungry crowds. As in the Amsterdam Cheese Museum, the employees at the Henri Willig stores are dressed for the occasion. As they attempt to slice enough cheese to keep up with the eager tourists, the employees provide information about the cheese and its origin. Henri Willig stores also offer top-quality stroopwafels (delicious typical Dutch cookies), and chocolates, which make great gifts for friends back home.
• Volendam. Located a short-distance from Amsterdam, the town of Volendam is a quintessential Dutch fishing village. Designed to provide a look back into the traditional Dutch way of life, Volendam also has a cheese factory you can visit. The complete cheese experience at Volendam includes a cheese factory, a cheese museum, and a cheese tasting area. For more information about the cheese factory at Volendam. 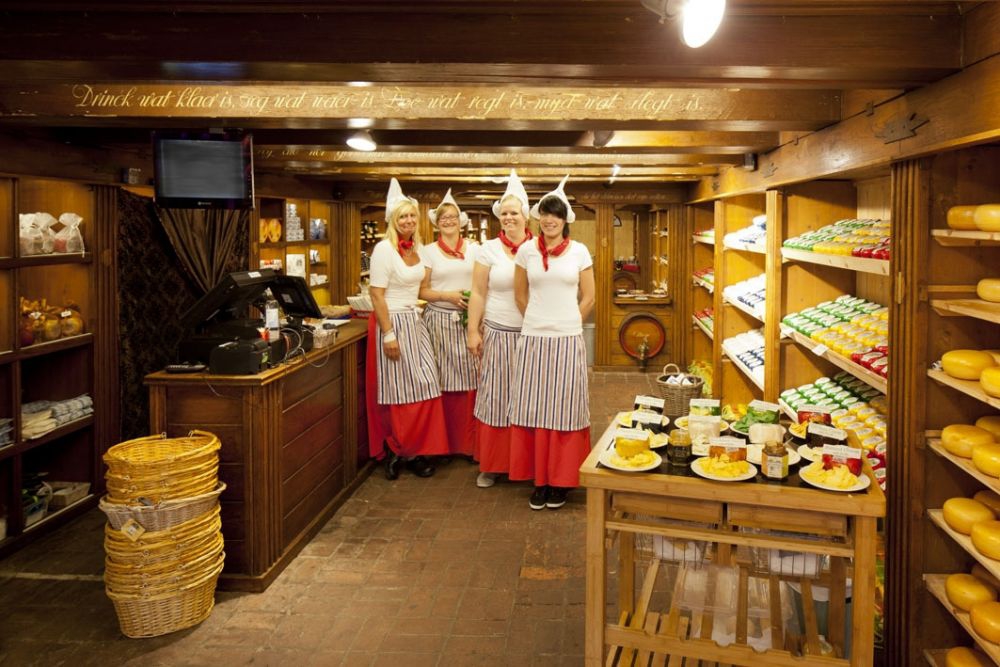 Insider’s Tips
I thought it wise to put in a few tips from a tourist-turned-local.
1. The green pesto cheese is my favorite. Make sure you try it. I know it looks weird and your first reaction is ‘green cheese? Gross.’ But please, trust me on this one.
2. If you plan to take some cheese home (it makes a great gift and you can buy a three-pack), make sure it is vacuum-packed. Tell the person from whom you order it that you will be taking it with you to another country. Be sure to mention if the country is inside or outside of the E.U. Different restrictions apply to different countries, but the cheese expert should be aware of all of these rules.
3. Finally, make sure you indulge in at least three cheesy references every day. Like cheese itself, these jokes just get better with age. 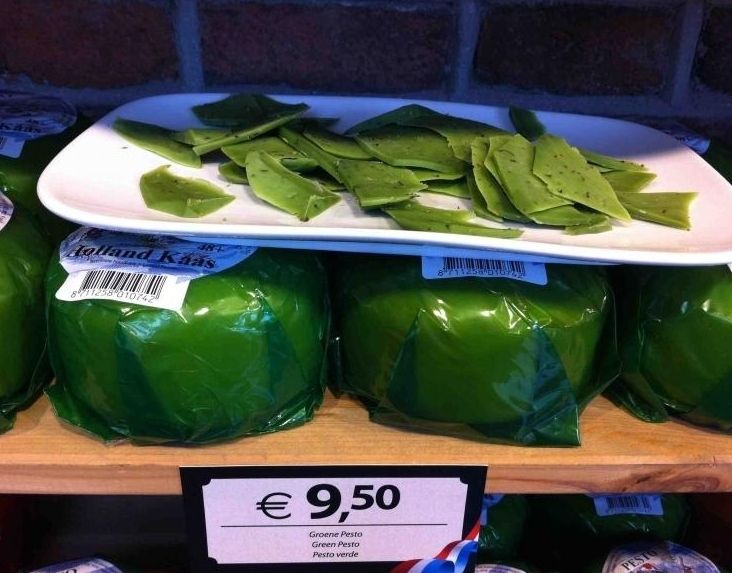